What does Google’s hotel search mean for consumers, hoteliers and hotel portals? 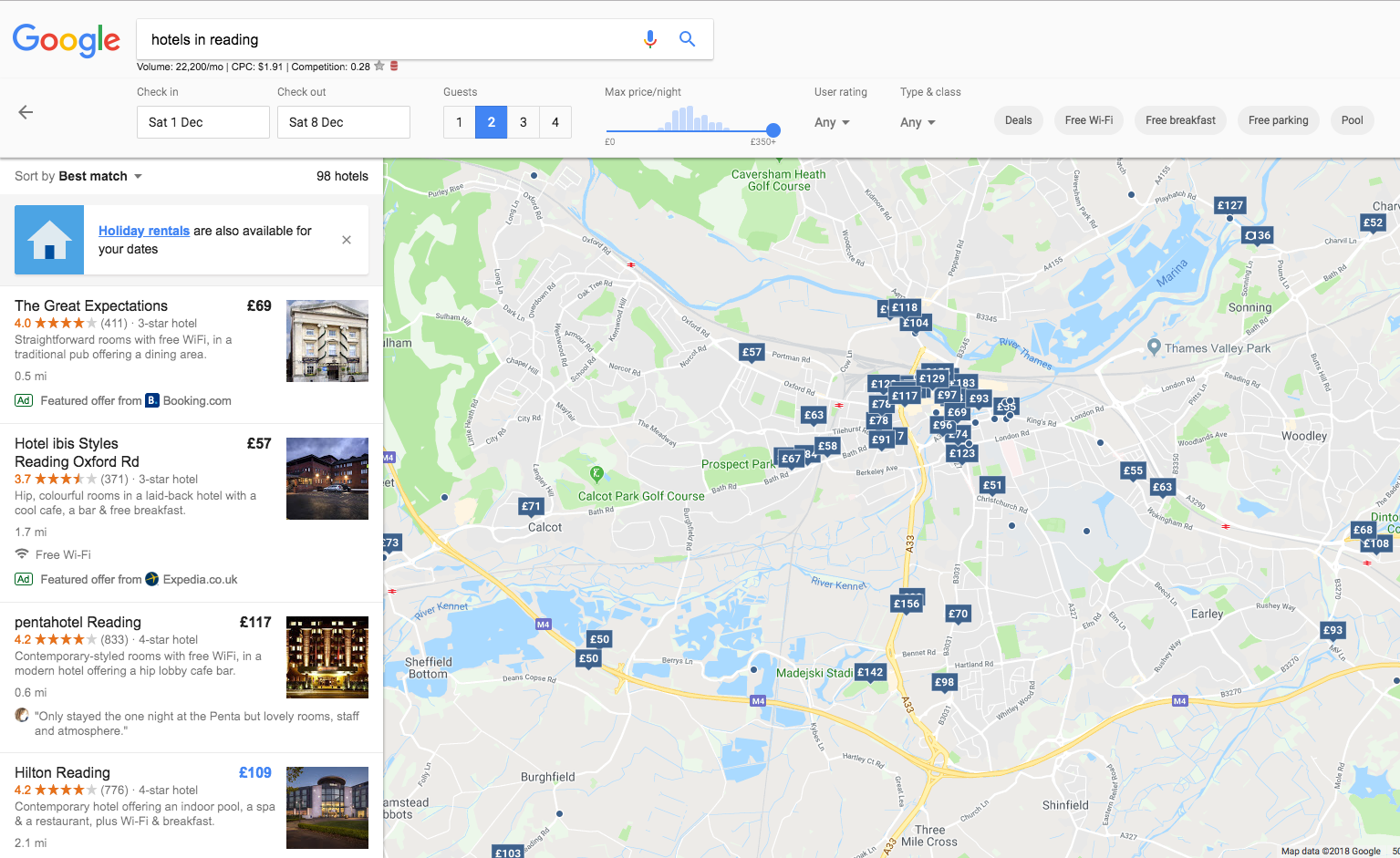 At this September’s Brighton SEO conference, Rand Fishkin reflected on the last two years of search, and made some fairly bold conclusions that Google is increasingly sidelining organic results in favour of paid ads and enriched content on the SERP.

Hotel search, the most recent addition to Google’s product offering, hints that this trend is set to continue into 2019. Who these developments will impact and how the market will react is up for question.

At first glance, the project raises similar concerns as were unearthed on the launch of ‘Google for Jobs’ back  in July of this year. Blue Array’s founder, Simon Schneiders asked what this could add to job search and whether the addition would erode the market share of existing job portals. A similar question has probably entered the minds of leaders within the hotel aggregator industry, who may now view Google as a prior competitor.

Hotel Search as a Commercial Opportunity

Plainly, hotel search offers a significant commercial opportunity. An industry-leader, Booking.com, take a base 15% commission on sales made through their portal which can rise to as much as 20% if the provider selects preferential status. To this point, hoteliers have paid such fees as a necessary evil to maintain online visibility and fill their rooms. Clearly, Google fancy a share of this lucrative market, and so enters the revamped hotel search feature.

Much like jobs, Google is not seeking to process the entire transaction from an initial search to a closed sale. Instead, they function as they would typically by directing the user to a third party website where the process can be finalised. Having browsed a few locations on the search, several online travel agencies (OTAs) take precedent. For example, of the top 12 listings for a booking between 01/12/18 and 08/12/18 in Reading town centre, Booking.com is featured in 11, ranking first in 7 cases and 2nd in the remaining instances. Expedia comes second, featuring in 10, ranking first 4 times and second or third in the remaining cases. 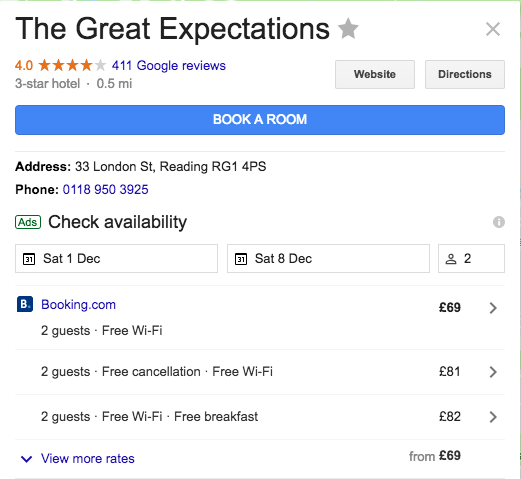 Further rates are hidden behind a ‘view more rates’ dropdown. 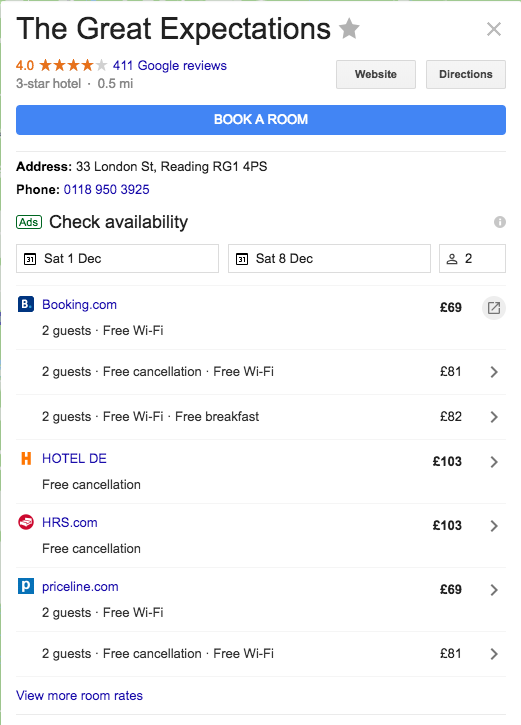 There’s no great issue in this. The largest OTAs have the most listings and offer users the best on-site browsing experience. Problems may arise for smaller portals as they are squeezed out of the market or consolidated into larger holdings as competing on the Google hotel search becomes prohibitively expensive.  In time, consumers will be forced to pay more as the providers (eg. hoteliers and owners of accommodation) are forced to shell out higher rates of commission to the largest OTAs with a monopoly on Google’s search.

Is the model sustainable?

Going forward, this ‘consumer > search engine > OTA > provider’ journey appears untenable and will certainly be ripe for disruption. In all likelihood, OTAs will take the biggest hit as savvy providers begin to approach Google directly, bypassing the third party and sending users to book on their company site. Interestingly, this can already be seen with larger hoteliers such as Travelodge and Premier Inn whose hotel listings pass users direct to their website. In some cases, the websites of some smaller chains and even independent hotels can be found somewhere among the portals and aggregators. 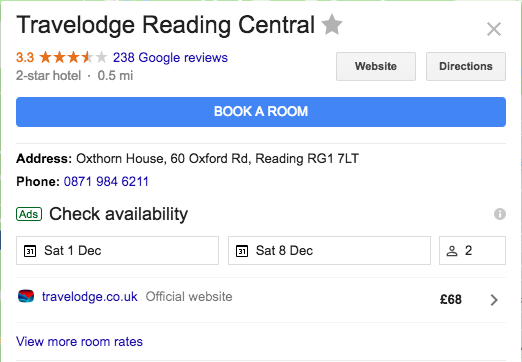 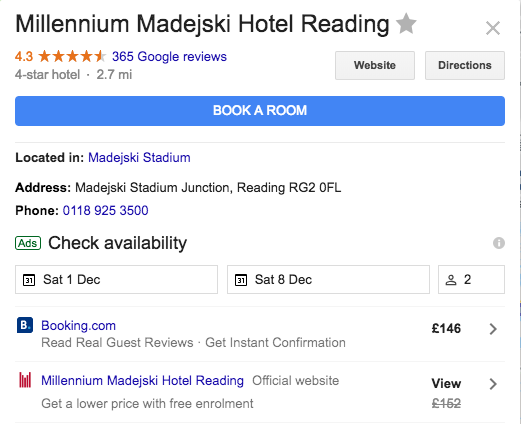 It may be that Google eventually hopes to squeeze third party OTAs out of the picture, and, theoretically, users would benefit in this scenario. Online prices would lower as OTA commission is removed from the question and providers would compete based on the quality of their offering as opposed to their advertising budget. However, this assumes that the results would be organic. If, instead, individual providers are forced to pay high ‘Ad’ rates for priority on the search pages, rates for consumers could rise further, while a lack of variety in search results could drive users away from Google en masse.

The Rise of Competing Search Engines

Competing, industry-specific search engines would welcome these users with open arms. AirBnB have already begun a venture into hotels after having created four new listing types (vacation home, unique space, B&B and boutique) in January 2018. Since its conception, the startup’s UVP has been met with popular acclaim. The site’s favourable commission rates (between 3% – 5%) and massive user base could present a significant draw to small and mid-size hoteliers looking to connect with holidaymakers across the globe.

TripAdvisor also operate a hotel search on a similar basis to Google. Their review pages guide users to OTA partners such as ‘booking.com’ or ‘hotels.com’ where transactions are finalised. By further commercialising their review platform, TripAdvisor’s total revenue hit half a billion dollars by the end of Q3 2018, rising 4% on the previous quarter. 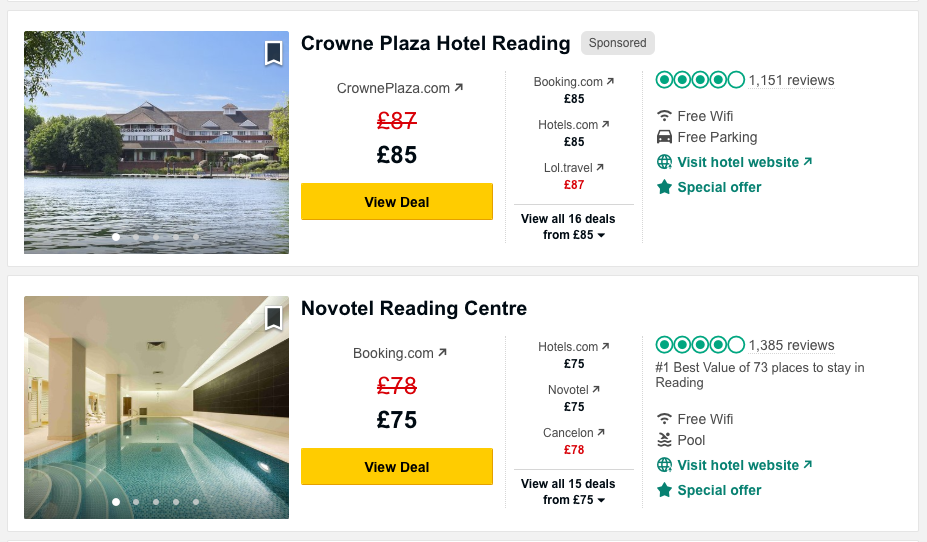 In many ways, the TripAdvisor website offers a more valuable product to users. While Google have built an interactive map feature, TripAdvisor offer users filtered results by a number of facets, including amenities, property types, distance from landmarks, style of property and so on. Features aside, the TripAdvisor model is built on consumer ratings which are leveraged by the prestige of the brand – users are willing to trust a property with a large number of positive TripAdvisor reviews and will persist in planning their holidays on the platform as a result.

With Google’s decision to prioritise results based on PPC and direct users towards hotel listings advertised by ‘hotel partners’, the element of trust may be lost on the consumer, especially when properties with low ratings feature prominently and highly-rated properties without the ‘Book a Room’ functionality languish in the results.

In all, it will be interesting to see how consumers, hotel providers and hotel portals react to Google’s new hotel search. It offers ease of use and clarified price comparison, however, users may grow sceptical of its search results, not least given the data scandals which have embroiled the conglomerate in recent months. Add to that the growing ire of antitrust legislators and Google may be forced to change tack altogether.

In the meantime, competitors could seek to enhance their product offering and leverage the trustworthiness of their brands in the hope of  pushing back the advances of search’s biggest player. Evidently, the future of this market is far from clear, however, greater uncertainty could yield significant opportunity for search marketing.

Good article Tom. I just tried the Google Hotel search and it works really well. The Google reviews are front and centre in the UI too which is great.

Nice article Tom! It’s an exciting landscape ripe for innovation and disruption. I feel for the small/boutique hotel/travel brand who isn’t digitally savvy.