SEO Insights > Video featured snippets – Should marketers be optimising for them?

Video featured snippets – Should marketers be optimising for them?

Video snippets are starting to appear increasingly in Google’s SERPs, often replacing the “traditional” text-based featured snippets we have now seen for a few years.

With this being a fresh new tactic, it seems many are trying to optimise their videos to gain this featured snippet position. However, are we focusing on this prematurely?

The videos appearing as featured snippets in SERPs, with “Suggested Clips” (as Google is calling them) are currently only likely to appear when a ‘how’ query is entered in search.

Here are some examples:

How to make a paper airplane: 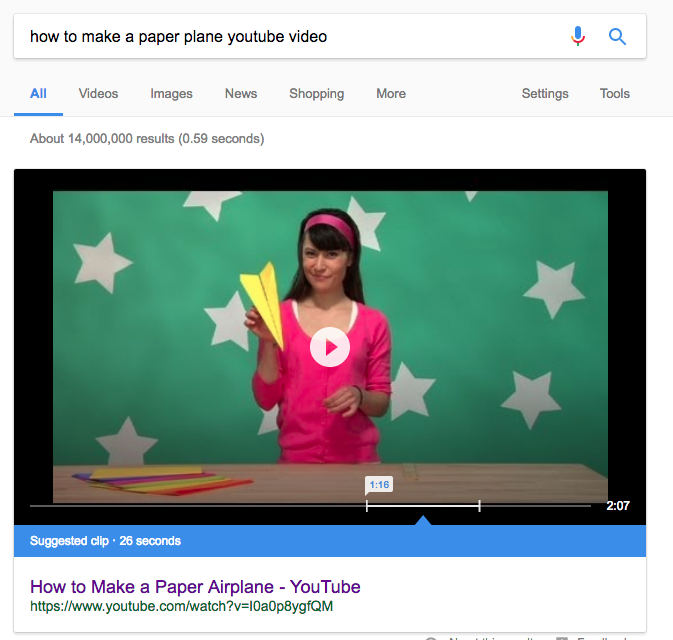 How to pump a bike tyre: 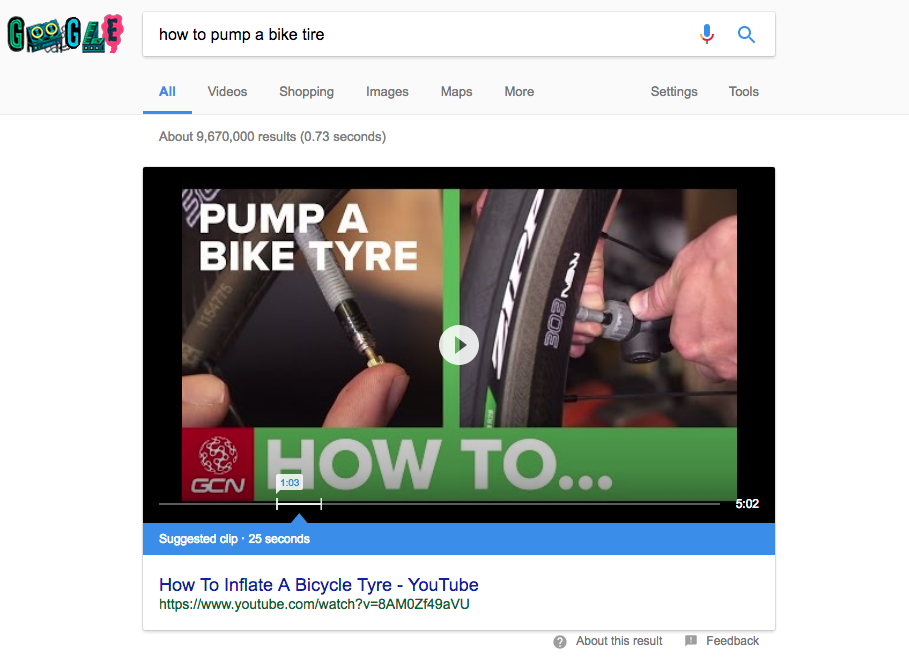 How to install a washing machine: 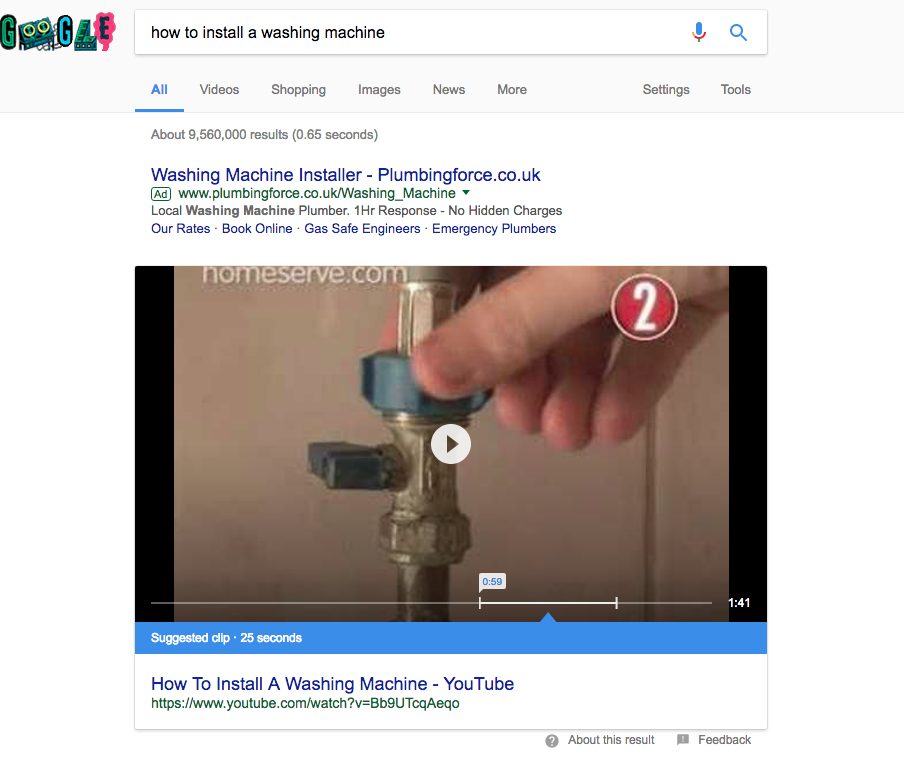 At the moment it is not as easy to find a suggested clip instead of a typical text featured snippet; with some terms you specifically have to add ‘YouTube’ or ‘video’ to the end of the query for the suggested clip to appear. 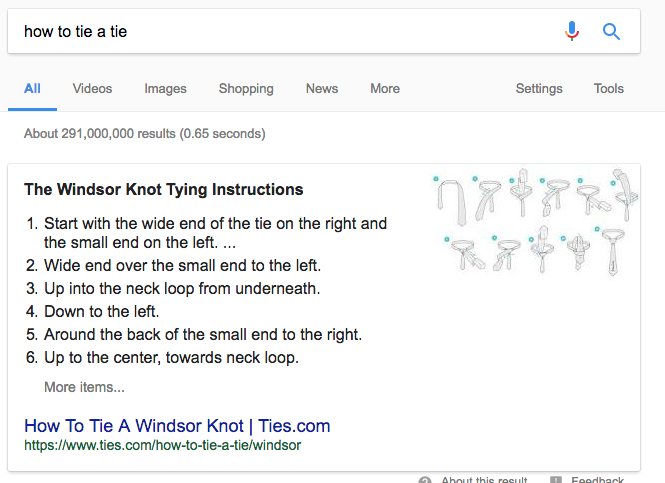 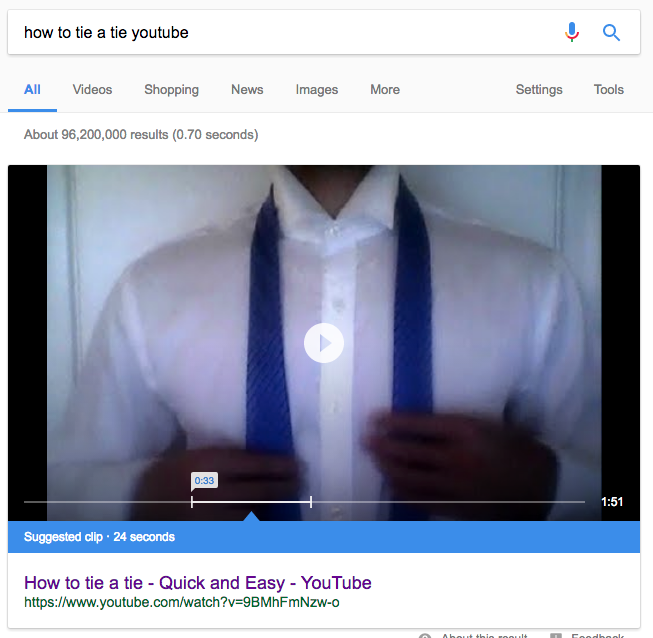 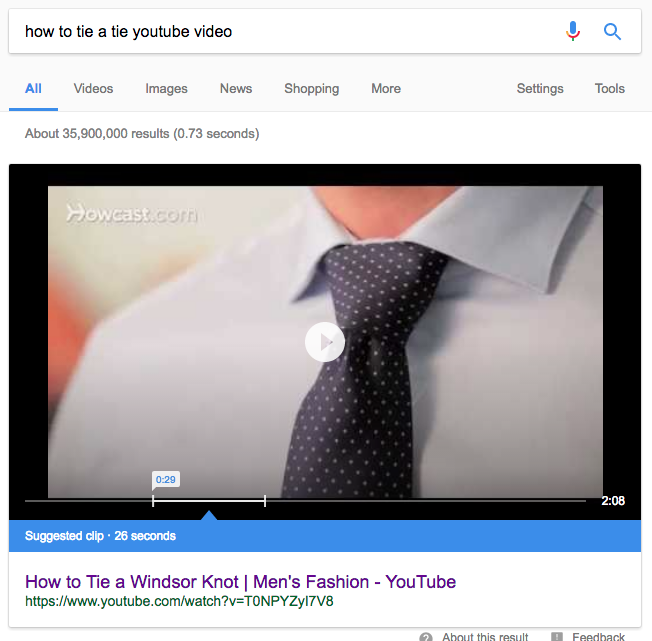 Notice something odd about the last two?

Surely this shouldn’t happen, as they are both YouTube videos anyway? Especially as the ‘YouTube video’ clip appears to be a higher quality video, and is also by an established publisher ‘Howcast.com’, compared to the ‘YouTube’ clip, which looks terrible quality!

If we delve into each video’s stats, we can analyse where this difference is.

So the low quality one is by Math Meeting, was published 5 years ago and has 23M views so far, as well as 247K subscribers to the channel.

The higher quality one is by Howcast (which even has a verified tick next to the name), and was published 3 years ago and has 18M views so far. However, the Howcast channel has over 5M subscribers – a lot more than Math Meeting’s video.

Based on the information in the table above, Math Meeting’s video seems to be outperforming Howcast’s video on views, comments and likes, so these factors may be considered more weighty than the others (particularly age and channel subscribers for Howcast is outperforming Math Meeting there). This may be why it appears when just ‘YouTube’ is appended to the end of the query.

Looking at YouTube search results for ‘How to tie a tie’, a completely different video we haven’t seen in normal SERPs has appeared in position one. 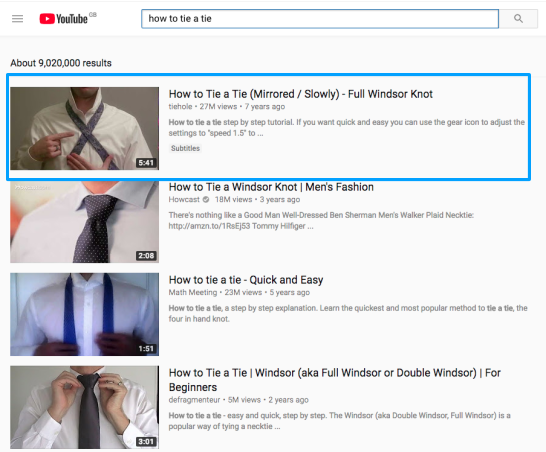 Looking at this page we can see it is older, and is only slightly better quality than the first video. However it has had more views (27M), it has subtitles (meaning someone has added a transcript), and is also by a publisher called ‘tiehole’, which includes the key term ‘tie’, – all of which could be factors in it achieving the first result in YouTube search results.

Here’s what I found:

So the reason the number 1 ranking video in YouTube search is not appearing as a suggested clip in normal Google SERPs is due to a variety of factors, but mainly it appears to be because the video is too long, too old and has a worse “like” to “dislike” ratio than the other videos. But this is just my opinion based on what I’ve found. 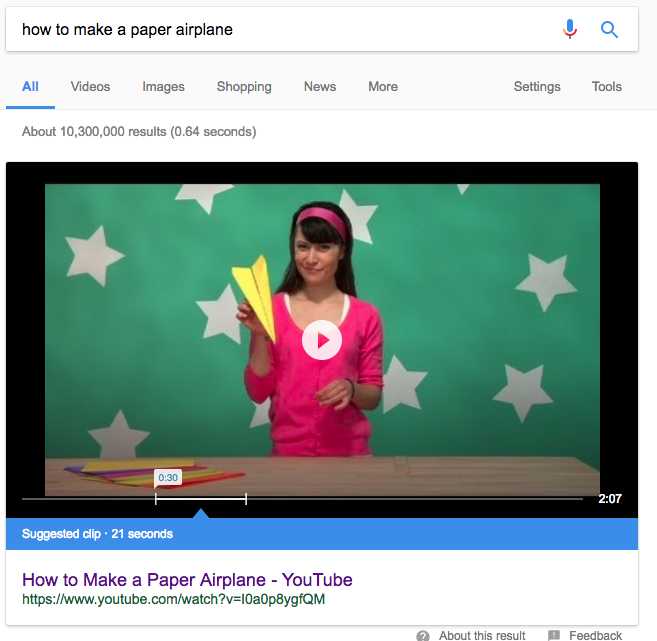 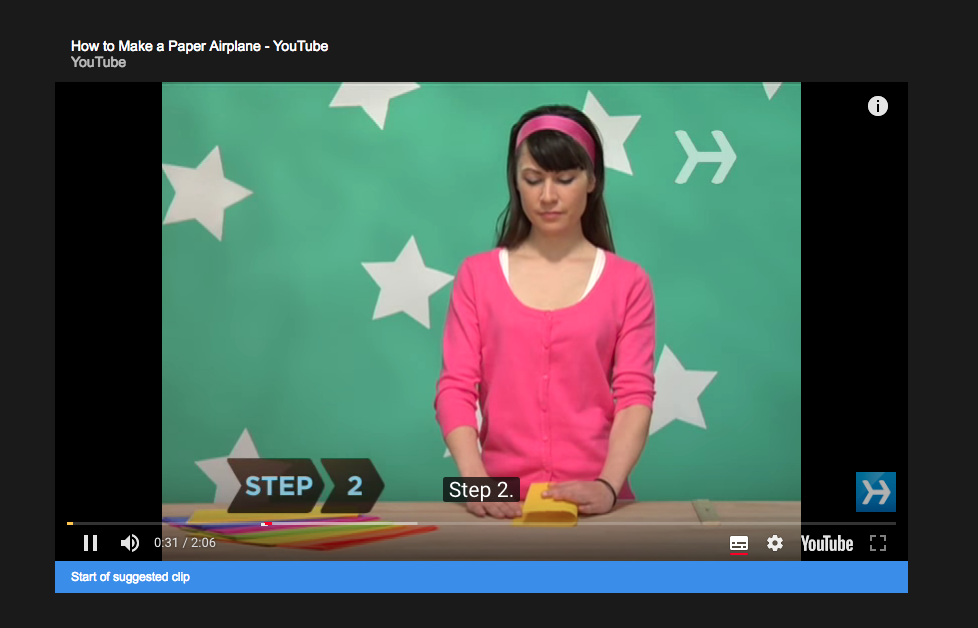 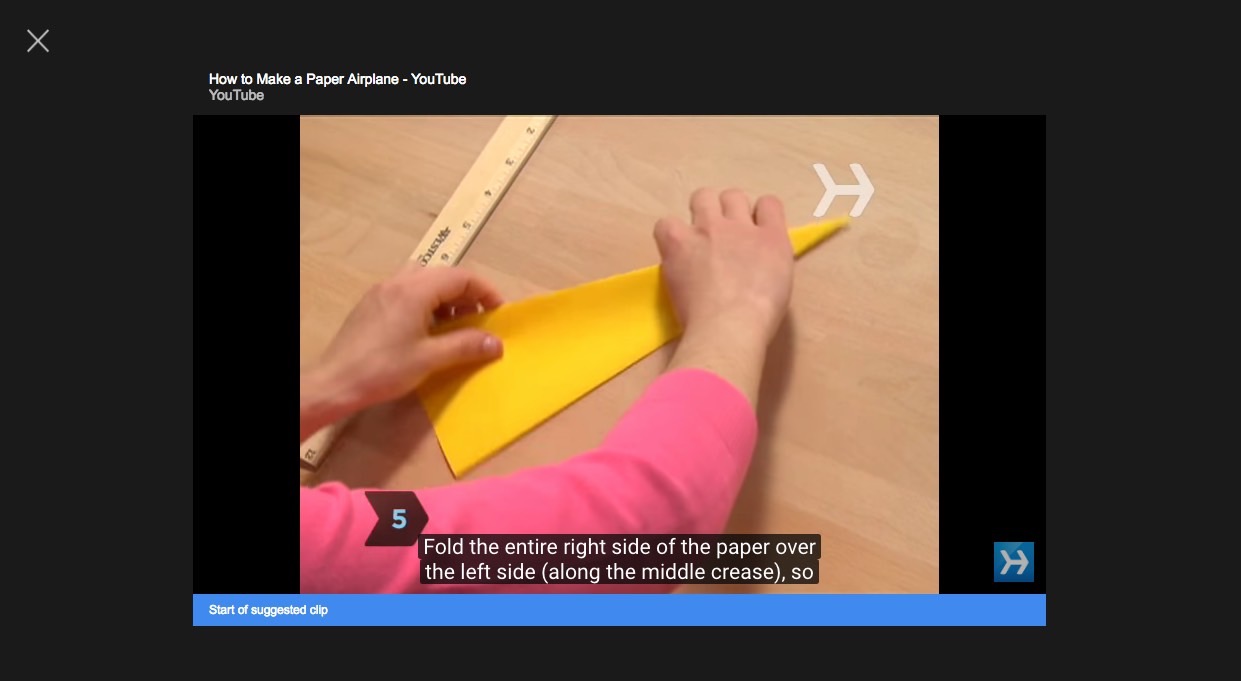 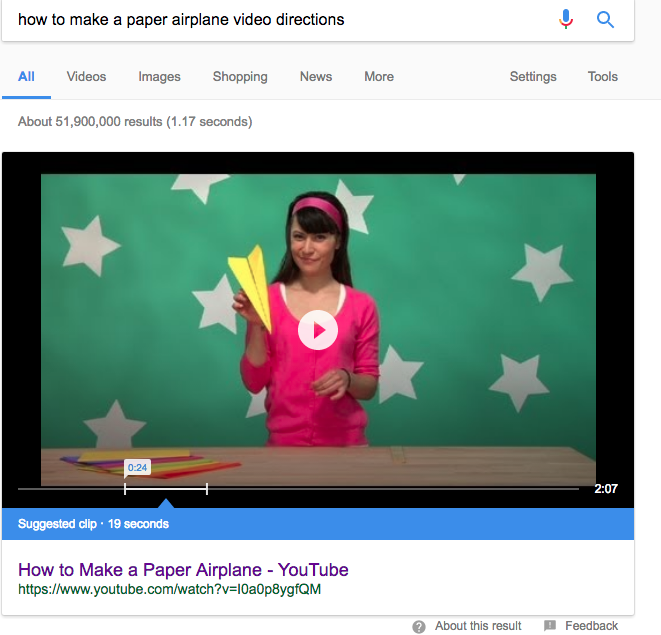 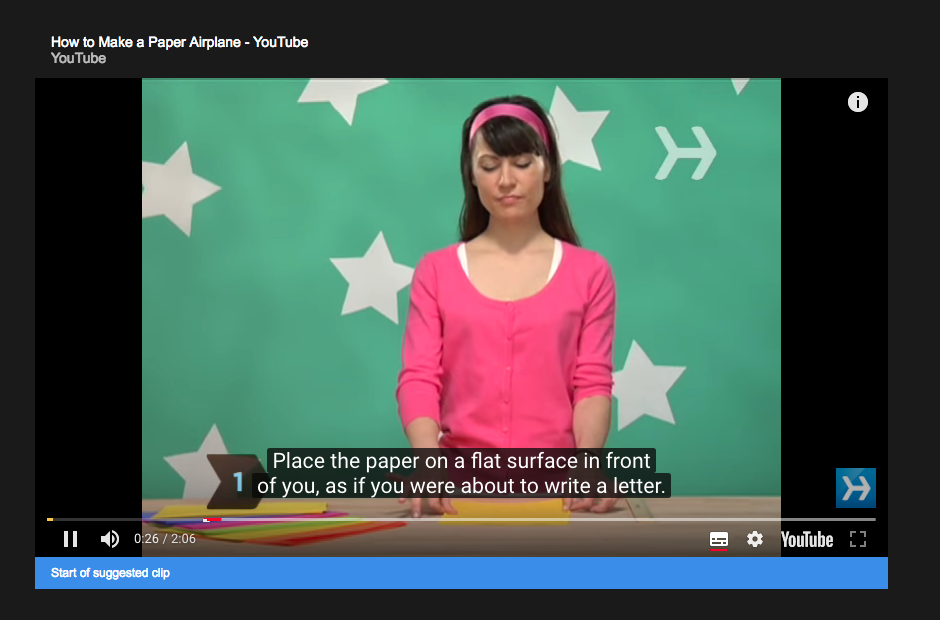 [Video can be found here: https://www.YouTube.com/watch?v=I0a0p8ygfQM]

Looking at the suggested clip on each of these variations, there is no reason why they need to all be different. For the first clip skips to the second step, the second clip skips to step 5, and the third clip starts from step 1. Surely a user typing in this query would want to see all of the steps required to make a paper plane? Instead of coming in halfway through?

Looking at the transcripts, there doesn’t seem to be any specific terms mentioned to result in different suggested clips appearing for essentially the same query, nor is there any timestamps within the description or annotations on the video itself. Nothing is pinpointing where the suggested clip should start. Is that why they are changing depending on the wording of the query? It could be possible…

What does this discovery mean?

It means the video featured snippet algorithm doesn’t have much logic at the moment, and that there doesn’t seem to be any clear reasons why multiple videos appear for queries that have been re-worded, or why different clip start and end times are appearing on the same video with a re-worded query.

So don’t be sure that if you have gained a video featured snippet that it will still be there tomorrow, as it very much seems to be a work in progress!

What other problems is this causing?

As well as not being consistent with the suggested clips, having a video result so prominent in the SERPs is also angering YouTube video creators, as having the video there means no suggested videos appear at the end, nor does a similar video start playing after the original has ended.

When a viewer presses the play icon on the snippet result, it doesn’t actually direct viewers to the YouTube location of the video, it is all done within the SERPs.The suggested clip function also lets the user know when it is the end of the suggested clip – in YouTube they could obviously watch the entire video if they wanted. This is not great in terms of watch time and engagement, for users will not be viewing the entire video as well as not getting all the features it would get within YouTube, e.g. like, dislike, comment and share.Bit cheeky isn’t it!

So based on this, should we be optimising videos for suggested clips in SERPs?

It doesn’t seem so yet. It may be worth giving it a go, but as this feature is clearly in the early stages, don’t be disappointed if the video is no longer appearing as a featured snippet one day to the next.

It is very common to see a video appearing as a featured snippet one day, then the next it is no longer there, or is showing a different suggested clip start point. It’s very sporadic right now.

It still isn’t clear how Google is ‘choosing’ these suggested clips, especially as it isn’t aligning with YouTube ranking factors. So we might have to wait to see if the featured snippet videos and suggested clips times start becoming more consistent in search results, then delve into these videos to see what is pushing them above the rest.

However, if you do want to test it out then, in my opinion, a clearly worded transcript, a shorter length video and, of course, the primary keyword in the video title are just a few key things that will get a video appearing as a featured snippet in SERPs.